Keynes identified a basic two sector macroeconomic model to determine equilibrium, which comprised of two major sectors, the household and business firms. The model assumes that there is no intervention of government and no foreign trade exists.

Besides this, the two sector model has a few more assumptions that it satisfies.

i. Prices, wages, and interest rates are constant. Keynes argued that prices and wages are relatively constant as opposed to the classical view which stated that they are flexible.

ii. Output is determined by demand or the total expenditure of the economy.

iii. Profits earned by the firms are distributed in the form of dividends rather than saving.

Keynes also believed that the equilibrium in national income is determined when aggregate demand/expenditure is equal to aggregate supply.

Keynes assumed that in the short run, current income is the most important factor that affects household consumption. This can be mathematically expressed as

Ca= Autonomous consumption (minimum level of consumption regardless of whether an individual or a household is earning any income or not);

MPC or the marginal propensity to consume is the amount by which consumption changes in response to incremental change in disposable income. i.e.

Graphically, the equation of consumption line C= Ca + λ Y, where, λ is the MPC resulting due to change in income. Investment expenditures are the firms’ expenses occurred during the production of goods and services. These include expenditures on capital goods like plants, equipment, etc. Investments may be both planned or intended or unplanned or unintended.

Keynes stated two important factors that determine investment expenditures in the short run, interest rates and expectation of future business profits. However, the motivating factor that induces investors is the business profitability felt by firms in the market economy.

Investment can be either autonomous or induced as shown in the figure. In determining the income equilibrium, investment is assumed to be autonomous. Investments are made based on the firms’ future profitability, regardless of changes in interest rates. Autonomous investment can be expressed as The significance of the 450 line is that it consists of points which are at equal distance from the axes.

Equilibrium is the point where aggregate expenditure line Y=AE intersects with the 45-degree line. In the figure, the line AE= C+I intersects the 45-degree line at point E where AE=Y and the equilibrium level of output/income is OYe. Any points to the right of E shows excess of supply that exceeds the desired level of expenditure i.e. Y> AE=C+I. Similarly, any point left of E shows excess of demand where AE=C+I<Y. Thus, any points beyond E is the state of disequilibrium.

The equilibrium level of income in two sector economy can be derived mathematically where equilibrium occurs when aggregate output is equal to aggregate expenditure.

Thus, the equilibrium income and output (Ye) is equal to the sum of autonomous expenditures (Ca + Ia) times the multiplier 1/ (1 – MPC).

Goods market is said to be in equilibrium when saving (S) is equal to planned investment spending (I). That is, S=I

So, the level of output/income that leads to planned investment being equal to actual saving, is termed as the equilibrium level of income/output. 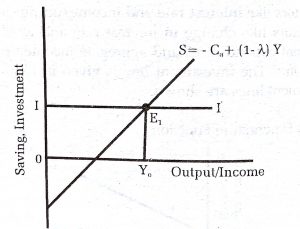 The figure shows the equilibrium level of income/output where equality between saving and investment exists. Saving is dependent upon income level since the ability of individuals and households to save is determined by the size of their income. So, the line that relates saving and income has a positive slope.

The saving equation has a negative slope indicating that saving takes place only after income level rise above the minimum threshold level. The investment line is parallel to the horizontal axis because investment is assumed to be autonomous which means, it is not affected by the income/output level.

In this case, equilibrium occurs when the saving line S intersects the horizontal investment line II. In the figure, E1 is the point of equilibrium and OYe is the equilibrium level of income/output.

Any point beyond E1 will lead to disequilibrium. To the right of E1, saving exceeds investment and output cannot increase in this situation. On the contrary, investment is more than saving to the left of E1.

The derivation of equilibrium level of income with saving investment follows here:

In a two sector economy, aggregate demand/expenditure is determined by the consumption expenditure made by households and investment made by the business firms. Mathematically, this is expressed as AE= C + I.

The income of household sector is composed of consumption and saving, since a part of the income earned is saved and becomes the supply source for the economy. Mathematically, it is expressed as Y= C + S.

Equilibrium occurs when demand is equal to supply, that is AE= Y, substituting equations, we get,

From the definition of savings, we know, savings is equal to income minus consumption, and since investment is assumed to be autonomous,

Thus, we get the equilibrium income/output as

In order to determine how spending patterns of consumers and investors determine the income and output in the Keynesian theory, the following table has been made

Column 1 in the table shows a hypothetical levels of income/output can be produced in a two sector economy. Depending upon the sales target, business firms choose a certain level. Assuming firms can plan to sell $600 billion worth of output, they manage factors of production (land, labor, capital, and entrepreneurship) accordingly. The income level of household is assumed to be $600 billion since, income must be equal to output.

Column 2 the amount of income households plan to spend on consumption. Column 4 shows the planned level of investment for the firms, which is assumed to be autonomous, so it has a fixed value of $50 billion.

Column 5 is the total of consumption spending and investment spending. The total spending increases with the increase in GDP, as rise in income leads to rise in consumption. Here, $600 billion is the equilibrium level which satisfies the national income accounting identity, Y= C + I or Y= C + S.