Transactional model of communication is the exchange of messages between sender and receiver where each take turns to send or receive messages.

Here, both sender and receiver are known as communicators and their role reverses each time in the communication process as both processes of sending and receiving occurs at the same time. 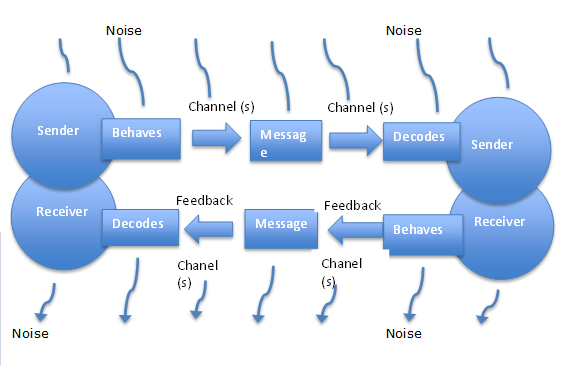 Transactional model is the process of continuous change and transformation where every component is changing such as the people, their environments and the medium used. Due to this, it assumes the communicators to be independent and act any way they want.

In transactional model, efficiency and reliability of communicated message also depends on the medium used. For example, the same message might not be perceived by a person the same way when it is send through a phone and when it is provided face to face. It is because of possible loss of message on a phone call or absence of gestures.

Transactional model relates communication to social reality of an individual or a group of people in social, cultural and relational contexts. Their responses cannot be predicted because they all have different backgrounds and mental conditions. Communication pattern depends on various factors such as physical, cultural, environmental, social, psychological, emotional, etc.

Cultural systems, social systems and relational situations are the most over-powering elements of the communication in transactional model, while physical and psychological context has considerable effect on the communication, enhancing or undermining it.

Social context in communication refers to the norms, values, laws and other restrictions of a society to communicate within a specific limit. It also includes rules that bind people’s ability to communicate. Society shapes the way a person communicates. Some of the examples are: greeting people when meeting, thanking, apologizing, etc.

Cultural context is the lifestyle and identity of a person. Caste, class, race, ethnicity, gender, etc are the contexts which promotes communication. If two people are from the same cultural group, they will have better communication with each other.

People have a closed mindset about the other groups of people they communicate with displaying the trait of Ethnocentrism. Experiences, attitudes, moods, cultural beliefs, social up-bringing, mindset, their sense of reality and many other factors affect the responses and the message exchange.

Relational context of communication relates to relationship history and manners.

A person talks with an old friend differently than a stranger. Manners take the role of communication when it is with strangers. Manners come from pre-established norms and values, and are more scripted making interaction difficult. Type of relationship and the roles of people create differences in the way people communicate. Communication always occurs on the common systems of both the parties.

Differences Between Transactional and Other Communication Models