Saving is defined as the excess of income over consumption expenditure. The concept of saving is closely related to the concept of consumption. Saving is the part of income that is not consumed. Generally, as the level of income increase, saving also increases and vice versa.

Saving function or the propensity to save expresses the relationship between saving and the level of income. It is simply the desire of the households to hoard a part of their total disposable income.

Symbolically, the functional relation between saving and income can be defined as S= f(Y).

The equation shows that the remaining amount after the deduction of total expenditure from total income is saving. Thus, saving is that part of income which is not spent on consumption

Relationship between Saving and Income

The table and diagram below clearly explains the relationship between income and saving:

Table 1 Relationship between Income and Saving 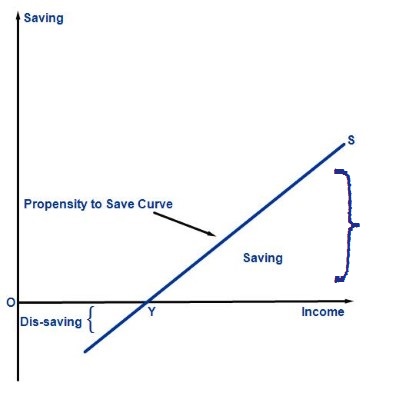 Saving function or propensity to save has two major attributes:

Average Propensity to Save (APS)

The average propensity to save is a relationship between total saving and total income in a given period of time. It is the ratio of saving to income that shows the portion of the income that people saved.

For example, when the disposable income is 180, consumption is 170, and saving is 10, we can calculate APS as Marginal Propensity to Save (MPS)

The marginal propensity to save or MPS refers to the increase in the proportion of saving as a result of increase in the level of income. It can be defined as the ratio of change in saving to change in income.

For example, when income increased from 180 to 240, savings also changed from 10 to 20. We can then calculate MPS as

This shows that, when income increased, the proportion of saving also increased. The saving made out of total income is 17%. In the diagram, BC is the change in income and AB is the consequent change in saving. So, MPS is AB/BC.

The determining factors that contribute to the saving function include Desire to save, Power to save, and Facilities to save.

i. Level of income

ii. Provisions for the future

The future requirements of money is uncertain. So, in order to have a secured future against any uncertain events, saving up at present helps to have a pool of extra money. Savings can be taken as a precaution for any unforeseen needs in the future.

The factors that determine the ability to save include

The ability or power to save depends on the efficiency of labor. If an economy has an efficient group of people, it increases production efficiency as well. This results in increasing income and thus people can have more money that can be saved, even after meeting the consumption expenditures.

Higher the national income, greater is the ability to save. Low national income in developing and under-developed countries is the main reason for no saving being made.

The development of various sectors like trade, industrial areas, agricultural sector, etc. is a source of increased income level, as there will be more inflow of money into the economy.

Saving also depends on the facilities availability. This includes:

i. Development of financial institutions

The development and expansion of financial institutions like banks, co-operatives, etc. encourage people to save more with their effective marketing strategies. They also provide attractive interest rates on savings.

The provision of security system such as old age pensions, medical insurance, unemployment allowance, etc. reduces the rate of saving in a country. When there is adequate provision of social security in the society, people feel secured about their future and they spend more of their income on consumption.

Progressive taxes reduce saving as taxes increase with the increase in income. People with higher income save less because of the taxes they need to pay. But if the taxes on expenditure are higher then, they are encouraged to spend less and save more.