Shannon Weaver model of communication was created in 1948 when Claude Elwood Shannon wrote an article “A Mathematical Theory of Communication” in Bell System Technical Journal with Warren Weaver.

Shannon was an American mathematician whereas Weaver was a scientist. The Mathematical theory later came to be known as Shannon Weaver model of communication or “mother of all models.” This model is more technological than other linear models.

Sender (Information source) – Sender is the person who makes the message, chooses the channel and sends the message.

Encoder (Transmitter) –Encoder is the sender who uses machine, which converts message into signals or binary data. It might also directly refer to the machine.

Channel –Channel is the medium used to send message.

Decoder (Receiver) – Decoder is the machine used to convert signals or binary data into message or the receiver who translates the message from signals.


Receiver (Destination) –Receiver is the person who gets the message or the place where the message must reach. The receiver provides feedback according to the message.

Noise –Noise is the physical disturbances like environment, people, etc. which does not let the message get to the receiver as what is sent. 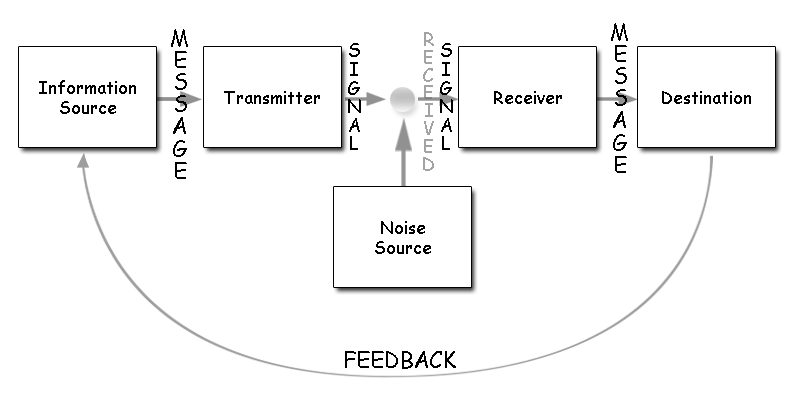 The sender encodes the message and sends it to the receiver through a technological channel like telephone and telegraph. The sender converts the message into codes understandable to the machine. The message is sent in codes through a medium.

The receiver has to decode the message before understanding it and interpreting it. The receptor machine can also act as a decoder in some cases. The channel can have noise and the receiver might not have the capacity to decode which might cause problems in communication process.

Similarly, air is the channel here, the noise present in his environment that disturbs them is the noise whereas his response is the feedback. There were only 5 components when the model was made. Noise was added later.

As Shannon was an engineer, this model was first made to improve technical communication, mainly for telephonic communication. It was made to to maximize telephone capacity with minimum noise.

Later, Weaver applied it for all kind of communications to develop effective communication and the model became famous as Shannon Weaver model. In engineering, Shannon’s model is also called information theory and is used academically to calculate transmission through machines and also has a formula.

A businessman sends a message via phone text to his worker about a meeting happening about their brand promotion. The worker does not receive the full message because of noise. It goes like this:

Businessman: We have a meeting at the office (“at 8 am” goes missing due to phone network disruption or noise)

Worker (feedback) : At what time?

Noise: Missing text due to disruption

The transmission error is the noise in this case. The feedback lets the businessman know that the message reached incomplete. The receiver gets the chance to get the full message only after his feedback.

There are three levels of problems of communication according to Shannon Weaver. They are: